At IndieCade on Saturday, Jenova Chen and Robin Hunicke discussed their work on Journey, the follow-up (due in 2011) to thatgamecompany's superlative Flower. If you're a regular visitor here, you already know about my unbounded affection for that game. Needless to say, I was especially keen to hear Chen (Creative Director) and Hunicke (Producer) present a work-in-progress report on their newest creation.

If you're not familiar with Journey, it's a game in which players meet and travel with strangers through a vast landscape. The game purposely omits voice and text chat, so players must communicate in other ways. Because Journey bears few similarities to other games, media coverage has tended to focus on its visuals, which often elicit comparisons to Fumito Ueda's Shadow of the Colossus. Chen and Hunicke acknowledge the influence, but Journey is a very different sort of game.

Hunicke began by articulating TGC's "AAA" design philosophy dating back to Flow. TGC wants to create games that are Abstract, Artistic, and Accessible. "Humans have a broad emotional palette," she said. "Games are good at accessing a small part of that palette." Journey is an attempt to widen that emotional appeal by changing the way people play together in a virtual space. 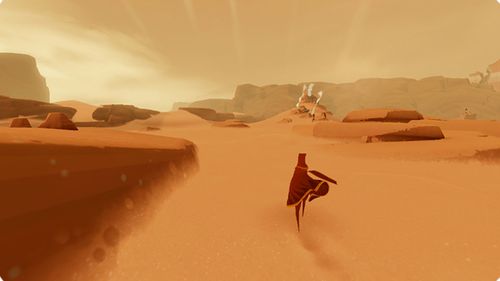 http://www.brainygamer.com/.a/6a00e... "I'm the kind of guy who likes to think big at the beginning," declared Chen, who went on to explain why he has recently spent so much time thinking about the social dimension of games. Entertainment, he noted, can usually be mapped to one of three spaces : Intellectual, Emotional, and Social.

The social aspect of games has grown increasingly important for designers ; but in Chen's view, multiplayer modes often feel "tacked on." We spend a lot of time in 3D multiplayer games "looking at our partner's ass." Social play facilitates combat in many games, but communication in these games is generally limited to utilitarian responses like "Headshot !" and "I need health !"

"If we want to do something else, we must rethink from the ground up," noted Chen. "We're trying to make a game in which 'social' becomes the core mechanic." TGC's aim with Journey is to create a space for communication that goes beyond how to defeat, kill, or win. That means raising the stakes on human to human interaction and making such communication feel fun and meaningful to the player.

Chen and his team experimented with a variety of communication options, but hardware issues limited his choices. Many PS3 owners aren't equipped for voice or text chat. "So we decided to go with no text and no voice. No words." This constraint ultimately helped define the nature of the project. 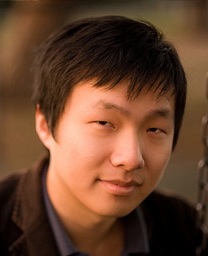 Hunicke described TGC's early concepts for Journey : "A sense of wonder about the unknown. A sense of awe about an environment. Somewhere you feel very small." She noted that Chen's early work was about pilgrimage - making a journey that others have made before you. The designers wanted to explore the feeling of togetherness between people facing daunting environmental situations. "We talked about monsters. ...We were influenced by Chinese dragons. We talked about killing enormous monsters...but then we realized that was Shadow of the Colossus. (Laughter)"

The team explored (and rejected) many scenarios designed to make the player feel small or vulnerable : hiding until a monster passes ; building a shelter against a giant sandstorm ; collaboratively climbing to reach great heights. They tested these ideas by building a 2D prototype game called Dragon, and they invited individual players to try it out. "We had people play the game, but we didn't tell them the other characters were controlled by real people."

Dragon taught the designers valuable lessons, and it refocused their approach. "It became too easy for players to stop caring about each other," observed Chen. "As soon as they were able to, players began pushing each other into the pit." While it served as an interesting experiment in player behavior and emergent gameplay, this was not the game Chen wanted to make. He began thinking about how to deliver feedback that would guide the player toward different behaviors without steering him or her too much.

"If you want to teach players not to do something, you don't need to smack them. You need to give them zero feedback." Negative feedback, Chen explained, is no less stimulating than positive feedback, especially as it relates to game design. Much of TGC's work on Journey has been focused on designing feedback that supports the game's ethos without dictating the player's behavior.

For example, the designers experimented with a karma system (enthusiastically supported by Sony marketing), which would have allowed gifting from player to player. "But we killed it," stated Chen. "Players would exploit it, and it feels too preachy. ...We want players to feel karma from their actions, but we don't want to lead them by the nose."

Dragon imparted other lessons, according to Hunicke. "It's not cool to design a game where everyone must repeat what everyone else does." Players must be able to succeed on their own and also with others. The downside of such flexibility is that it introduces tremendous complexity to the design. If every puzzle or problem must accommodate multiple play styles, things get very complicated. Journey, it was decided, would accommodate two players. 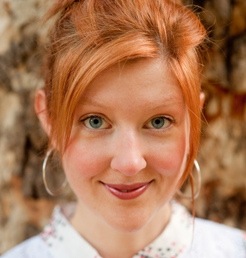 Journey is not a co-op game

At this point Chen made an important distinction. "Most co-op games are forced collaborations. You have no choice. ...Journey is not like that. Journey is not a co-op game or a 2-player game. It's a game you play together or by yourself." "The game must allow you to maintain your own identity," Hunicke added, "We need to offer the possibility to engage or disengage from shared activities. This way collaboration will be truly genuine."

Chen stated that development on Journey has required an inordinate amount of time addressing camera issues. "The feeling of seeing each other from great distances is very cool, but also very hard to do in a game. It's way too easy to lose track of each other." The team continues to explore ways of addressing this, including "tuning the shout" - the game's system (triggered by the circle button) for helping players locate each other when they've exited each other's visual frame.

Journey will encourage players to join each other ; but if a collaboration doesn't work, the game will allow players to separate and find someone else, or go it alone. Chen and Hunicke were purposely vague about details, but it appears the game will utilize a system that dynamically responds to players joining and disbanding without exiting the world or calling up a menu.

The team at TGC likes to craft thesis statements for their games, and they rely on the pre-production and development periods to test a game's fidelity to its thesis. Their original thesis for Journey was "Together we can move the mountain." As the game evolved, this was later replaced by "We all walk the path ; each journey is different." "It sounds a little religious, but we like it," said Hunicke.

Nevertheless, it doesn't quite capture the game they're making. What thesis statement best describes Journey now ? "We have a philosophy that we don't reveal the thesis of our games," Hunicke noted. "We're converging on what that is, but we want players to discover what they think it is for themselves."

As for game mechanics, Chen noted that players tend to get obsessed with resources, especially if those resources make you powerful. He's tying to create mechanics that avoid causing jealousy between players. "True collaboration is hard. Collaborating because you want to, not because you're forced to ; not because you're trying to slay a monster, but just because it feels good. Very hard." The design challenge for Chen and Kunicke is clear : how to design dynamics that will make the player feel rewarded for such collaboration, without the standard bag of goodies (XP, treasure, weapon upgrades, etc.) games routinely rely on.

Finally, in the Q&A following the presentation, Chen responded to the question : "How do you (or should you) control a player's ethics ? Chen replied emphatically : "When you create a world, you create a value system for that world. This is a big responsibility. ...We are engineering people's behavior, but we don't want to be preachy. It's a very hard balance to strike."

Posted by Michael Abbott at 02:36 AM in Game design | Permalink