While it’s been said to have the worst graphics and controls, the unique, appealing characters and unpredictable complicated storyline have successfully grasped audiences. In this session, DEADLY PREMONITION’s Game Designer, SWERY, explains his unique method of architecting games.

How did this awesomely strange so bad it’s good game come to life ? What processes were used to create the meticulously calculated storyline and characters ? What exactly are the lovable unnecessary elements that SWERY speaks of ?

This talk touches upon the 7 points to check if your game’s storyline might already be dead with this a frank and candid session.

So please, relax, and join us in a roundtable-like discussion. And if possible, please bring an aromatic fresh cup of coffee.

Game Design in the Coffee. 1

Good evening everyone. My name is Swery from Access Games. I am the director and writer for Deadly Premonition.

I am honored to be able to speak with you today. And I’d like to express my gratitude to those who made today possible. Thank you !

And to those who took part in the video, thank you guys too !

Now, today, I’d like to talk a little about what I’ve learned through the process of making games, specifically about some tips regarding storyline creation and game design.

Point 01 : Make gamers think about your game when they aren’t playing it

Games you don’t remember when you aren’t playing them are already dead.

1.Main character’s desire to smoke is contagious to the player in front of the TV

Gamers who smoke have said this alot. When York lights up a cigarette, it makes them want to light up a cigarette too. So there’s a cause and effect going on.

Having as many of these scenes in the game that causes an effect to the player, is a good thing. 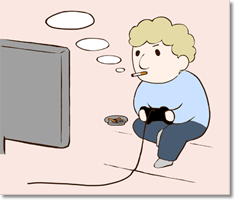 In the same fashion, Deadly Premonition has sleeping, hunger, shaving and showering. Though these seem totally unnecessary at first glance, help with the cause and effect, because they act as reminders to the player. It’s not about "seeing the character go to sleep and so I should do the same", it’s more about, having what goes on in the TV screen acting as a REMINDER to the player, like "oh, I better some sleep" or"Oh, I better eat something". These REMINDERs in life, are interesting because they go into a special part of your brain, a place that remembers them, so the next time you shave or go to bed, it’s linked in some way to Deadly Premonition. 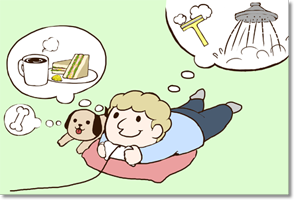 3.Memorable and Relatable："Fortune Telling Coffee" and "Conversations About Old Movies"

Swery likes to put daily human needs, physiological, deep desires into the game because they help causing an effect to the player who is sitting outside of the TV screen. And for Deadly Premonition, we took another step forward and put in some playful elements.

People have come to us and say that they’ve taken deep looks into their mugs of coffee for signs of heavenly messages. Or, that they’ve rented one of the movies that York talks about in the car.

These fun elements helped us make players, remember the game. Regardless of whether it occured days or months after they finished the game, simply having a cup of coffee or seeing an old movie, would trigger memories linked to Deadly Premonition.

1.The 3rd Method for Creating a Sense of Freedom in a Story with Deadly Premonition

Here are 2 commonly known methods that would help, multiple endings and side quests. In Deadly Premonition, we chose a third method. It was experimental, and we called it the freedom of timing. Freedom of timing, basically means allowing for a change of heart.

While moving forward in a quest, there are times when you want to change your mind and not follow that quest. Doing so though equals failure.

But for DP, we thought that should be allowed as a player’s decision. And so we spent some time to make an extra branch so that the player can have that as an option. This allowed players to feel better about taking a break from the game, and this allowance of a "change of heart" if you will, makes the player feel more comfortable, and cooperative with the story.

3.By supporting and allowing for the player’s "Change of Heart" we strengthen the sense of "freedom" and mitigate the sense of "being forced to do something against our will"

In the flow in the last slide, if the player fails to move forward, he fails, and so he is given a hint and is scolded at the same time. It was like that in Spy Fiction another game that Swery made a while back. "What are you doing ! Mission failed !"

But in DP, we wanted York to go along with the player when the player changes his mind.

"That’s exactly what I was thinking !"

And when the player hears that kind of friendly response, it causes the player to feel more comfortable, more in control and hence a refreshing sense of freedom.

In Deadly Premonition, we even made one of the important characters say that you have no need to rush. Modifiying the story to confirm that it is ok to change your mind, allows for the player’s desires to be fulfulled.

4.Earn the Player’s "Cooperation with the Story" and "Suspension of Disbelief"

And once that’s done, The gamer will "cooperate" with the story, if you will, and proceed along the path that you create.

Normally you’d do what’s on the left. Synopsis, plot creation, character list generation, storyline creation. It’s not uncommon that you’d start making the map and figure out all of the details of your character’s backgrounds, after all of this has been done.

But for DP we did what’s on the right. Synopsis, Map and Character Details, then figured out details of the map and what the characters would be doing on a 24 hour timetable, then create the plot and the storyline.

The characters and universe are just as important as the storyline.

When we started DP there weren’t many games that we could refer to that had open field/freeroaming game play. So we had to figure out a way to do this on our own. The player is going to be placed in this world for a long period of time, and so the "stage" the town of Greenvale is very important. Then I thought we could figure out who would live there. That way, we can have a really rich, dense or deep universe.

And in hindsight, since the detailed story was written after the setting and the characters were made, one might say that it was created more like a TV series or a weekly manga magazine than a movie.

1.Each sequence in the progression path causes a desire to quit

2.Intentionally divulge bits of the next challenge before the result screen and generate the desire to find out what happens next

You need spend quite a bit of time to make deep characters. It helps to make  a resume for each.

Swery used mind mapping to get at least a fuzzy image of the character,  then wrote down some notes to then generate a resume (A CV - I think for Europeans)  for that character.

It doesn’t have to be final, you can change things while writing the story,  but getting just the core elements locked down will be important.

It’s also important that your character can be mimicked.

So having some signature poses, or signature phrases that the character would  use will help. This partially goes back to the first point where I talked  about having something inside the game affect the player outside and away  from the game.  Swery thinks it’s important that your fans can copy the poses and use the phrases,  and basically be able to impersonate the characters used in the game.  Swery would even go so far as to say that it would be better if your fans can easily  draw your characters because that way, your fans can have so much more fun  with your game.

So they say every rose has its thorn.  Just like every old cowboy has watched the TV show Facts of Life.

The three characters here, dapper yet otaku, beautiful looks but filled  with personal problems and is a bad cook, and a nice guy that has a hard time  keeping his pants on.

1.Agent York’s manner of speech is inspired by "Liverpool Sound" and "British Invasion" 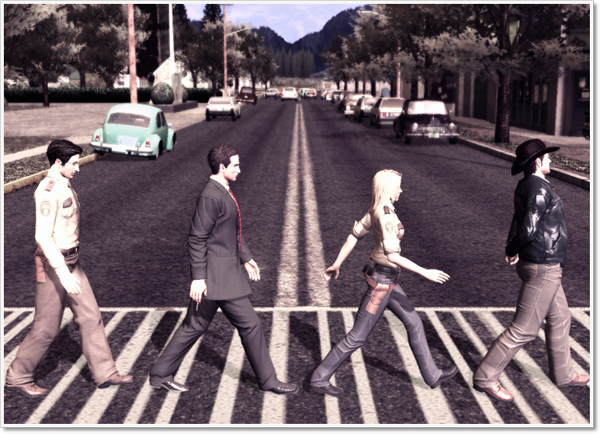 But I had to give directions to actors and ask for other takes and give OKs in the studio.  And so instead of focusing on the actual content of what was being said,  he focused on how the lines were being spoken, does it fit the character’s situation,  does it sound like the vocal range fits the character, and the rythm  and the updowns in tone, do they work with the scene ?  And so, York spoke with a good rythm, exact and light, kind of like the liverpool sound  and british invasion.

So how does this work with other characters, George is tough and gruff,  destructive and wild, but old, kind of like the hard rock of the 80s.

Emily was somewhat but not really country style, but she needed to be nostaligic  but still fresh, and offer a sense of motherly relief to the player’s ears.

Of course, Swery didn’t use this on every character but he was able feel the emotion  in what people are saying and its the emotion that is important.  What I’m trying to say here is, make sure you have your own set of rules  for voice recordings.

Use all of your ideas while you can use them !

To create wonderful scenario and attractive characters, the most important one： After all, it is your "ideas".

Use all of your ideas while you can use them ! Unnoticed Ideas Explode When They Do Get Noticed !

Point 01 ：Make what happens in the game resonate with the player outside of the game !

Point 02 ："Freedom" in gameplay is the freedom of timing !

Point 03 ：The story is important, but the universe and characters are just as important !

Point 06 ：Agent York’s manner of speech is inspired by "Liverpool Sound" and "British Invasion" Point 07 ：Use all of your ideas while you can use them !

Access games will continue to make games that challenge the boundaries of video game designs.

If given the chance, Swery would like to use the experience he has to make games that take larger leaps than seen before, for the world wide audience. For example a game where every character can become the main character, and emotionally engaging games that you can dive into every season, kind of like those tv dramas that last for seasons and seasons.

So, that’s it all of the time we have today.

I’d like to thank everyone who showed up, and also those that helped with this session. Thank you for the GDC staff and everyone in this room !!