My first encounter with Deadly Premonition came when I spotted it on the shelves of a local video store. Suffice to say, the cover art stood out from the crowd : 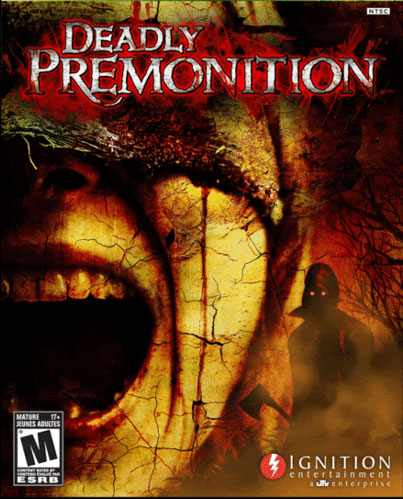 In a field of sports games, militaristic shooters, space marines, and the occasional swordsman v. dragon, a hooded person screaming as blood runs down their face counts as something of an anomaly. The axeman, naturally, sealed the deal. I rented the game immediately, and started playing it later that night. Just two hours in I'd already decided that I had to purchase my own copy, which I proceeded to do the next day.

I was ready to write an article nominating Deadly Premonition of the title of "Game of the Year" just halfway through its runtime. I'd already started grabbing screenshots and outlining when I noticed that the website Something Awful had posted a satirical article making the same suggestion. This left me thinking that I really ought to see what general critical consensus was before stepping up to make a fool of myself (once again). I quickly finished the game, and once I'd stopped weeping openly, I swung by the old Internet to see what various sites had to say about the game. After a little skimming I came to the conclusion that people were universally hard on the gameplay and graphics, but divided on the story. There was a "so stupid it made my brain bleed" camp, as well as a "so stupid I couldn't stop laughing" camp.

I wondered, for just a moment, anyhow, whether they'd played the same game I had. You see, the thing I responded most positively to in Deadly Premonition was the writing.

It may not have Heavy Rain's graphics, it certainly can't compete with Alan Wake's omnipresent product placement, but it has something I've rarely, if ever, seen in a videogame—a truly great story. Not great in the "so bad it's good" way, not great in the "high camp" way, not great in the "we're too hip to step into the world of a game and actually appreciate it for what it is, so let's just snigger from the sidelines" sort of a way. I'm not blind, mind you—I'm fully aware that the game can be enjoyed in all of those ways, I'd even admit that it invites those interpretations with its broad characterisations and supernatural flights of fancy. There's another, better way to approach the game, however. For anyone willing to take it at face value and suspend their disbelief, the game offers a rich world full of fascinating characters and enthralling mysteries. Players willing to engage with Deadly Premonition on its own level will find a story unlike anything they've seen in a videogame—and they'll find themselves wishing more games went that extra mile to create truly compelling narratives. 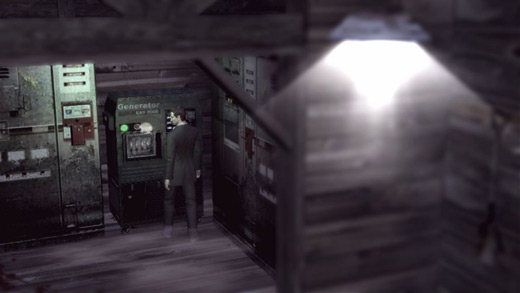 The game received a 2.0 from IGN, and a 10 from Destructoid, but both reviews approached it in exactly the same way—from a place of ironic detachment. Neither one was able to engage with the story, and so they couldn't see the game's true value. IGN couldn't get past the craziness of the plot, and Destructoid found the whole thing hilarious, going so far as to give it an ironic grade. By not being willing to just suspend their disbelief and inhabit the game's insane world, they missed out on one of the most special videogame storytelling experiences of all time, as well as the opportunity to really get to know a videogame character like never before.

That's right, because of a brilliant gameplay conceit that I'll expound upon at length later, Deadly Premonition allows the player to get inside the head of its main character in a way that no game (and nothing outside of novels) ever has—by the end of the game a player who has fully explored Deadly Premonition will know York Morgan more than they've ever known any other videogame hero, and once that's the case, they'll find it impossible not to be touched by his experiences. This is one of the most rawly emotional stories ever to appear in a videogame, and it has the ability to, if you let it, pull you in like no other medium could manage.

I'm not saying that Deadly Premonition should be the template for how every game should be designed—yes, the "gameplay" is largely abominable and dated—but it should be looked at as a singularly brilliant example of videogame storytelling, one that deserves to be studied by every game developer out there, so they can see how a story can succeed where 99% of video game stories don't. Deadly Premonition makes you a part of the story, and luckily, it's a fascinating story to be a part of.

But hey, I'm getting ahead of myself. I'm not just here to talk about Deadly Premonition in general, I'm here to present some highlights of the game, go in-depth about some of its details and mysteries, try to explain just why it's such an incredibly special experience—basically to convince anyone who takes the time to read this to play it for themselves.

In fact, let me just pause right here to encourage you to go out and buy the game—the rest of these articles are going to go into exhaustive detail about the game's plot, characters, and mechanics, and I can't stress enough how much better a time you'll have discovering all of it for yourself, playing late into the night with all the lights down low. You can always come back and read the articles later—they're not going anywhere, but your lack of knowledge about Deadly Premonition's secrets is.

Okay, now that the convolutions are done with, let's start the game !

As mysteries must, Deadly Premonition begins with a corpse. An artistically posed corpse at that. More importantly, what the hell kind of tree is that ? 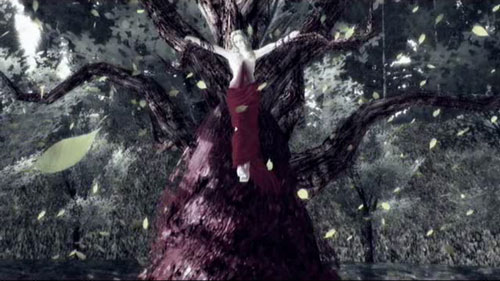 Seriously, though, just a minute into the opening movie and I already know I'm in for something special. You've got sex, violence, biblical allusion, demonstration of character traits without dialogue—this is clearly the opening of a real story, one that's shooting at a target slightly more difficult than the average murder mystery. 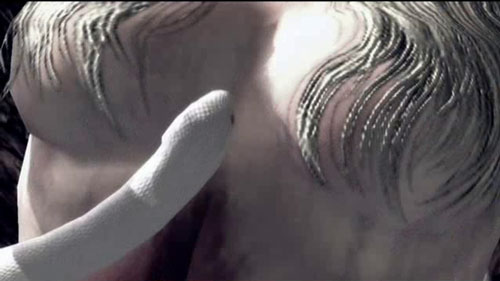 You've got an Eve crucified to the tree of knowledge as a flesh-coloured snake slithers between her nearly-naked breasts. I generally prefer my imagery to be a little less incredibly on-the-nose, but the game wants to make it absolutely clear that the woman's death was caused, at least in part, by a curiosity about the forbidden (specifically sex). The fact that Deadly Premonition's opening gives me a chance to talk about the imagery being employed alone serves to set it apart from the crowd, and is just the first of the game's many, many wonderful flourishes.

The movie then goes on to check in with a variety of the characters we'll be meeting over the course of the game, each of whom is dealing with news of the death in their own way, before the whole thing ends with as interestingly-framed a shot as you're likely to see in a game. 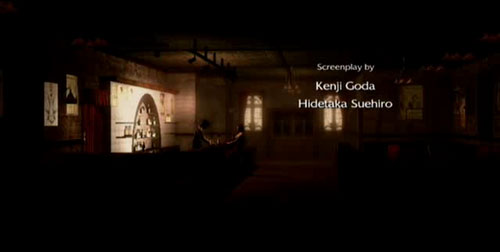 The game hasn't even started yet, and we're already being shown that violence has crushing real-life consequences, causing people to run the gamut of reactions from stoic resignation to utter hysteria. Before we know any of these characters' names we understand they're important, and can start to make guesses on how they fit into the overall picture. The mystery's already begun pulling the player in, and we haven't touched the controller yet.

If you don't want his identity and details of the plot spoiled, I'd like to encourage you once again to zip on over to Amazon where you can order a copy of Deadly Premonition for under twenty dollars. In fact, if at any point in this series of articles I manage to make you feel like this is a game worth taking a look at, I absolutely want to encourage you to immediately stop reading and go get the game—you won't be disappointed.

And if you are, hell, it was just twenty dollars. Send me a bill. I won't pay it, but feel free to send it along.

Shadows of the Damned